Actinobacillus suis (A. suis) is an emerging disease issue, particularly in high health herds. Our diagnostic results indicate that this pathogen continues to be an issue in Western Canada and it has been isolated from Ontario cases with greater frequency in the past year. A. suis infection causes septicemia resulting in sudden, unexpected death and polyarthritis, particularly in suckling pigs. In growing pigs, symptoms often include acute pneumonia and pleuritis that may mimic A. pleuropneumoniae infection. Rapid onset of this disease makes treating with antibiotics challenging. There are two known serotypes of A. suis , types O1 and O2. The serotype is determined by Western blot analysis (immunoblotting). Type O2 is considered the most virulent and is most often associated with disease. REF (restriction endonuclease fingerprinting) analysis can be done on the DNA of the isolates for further comparison. This is a technique used to determine whether strains isolated from a herd are likely to be similar – a particular issue when an autogenous bacterin is in use. There is no commercial bacterin available currently for control of A. suis infection.

A 2,400 sow high-health, PRRS positive start-up operation in Western Canada experienced 33 gilt deaths soon after the addition of open gilts from a new source. The pigs died quickly and exhibited cyanotic extremities, diamond skin lesions, arthritis and thumping. Diagnostic investigation implicated A. suis . The veterinarian chose to use an autogenous bacterin as part of his control strategy. The bacterin evolved to include 3 A. suis isolates characterized as different by REF and was formulated with an aluminum hydroxide adjuvant with a 21 day withdrawal time. A serology study was conducted to assess the impact of using this bacterin.

The data suggests that use of the bacterin in the breeding herd stabilizes the antibody titre to A. suis in piglets from vaccinated sows, regardless of the parity of the sow. This leads to reduced problems with inconsistent immunity among animals.

The effect of vaccinating gilts before farrowing on A. suis titres in these females was also assessed. The results are illustrated below. The incoming gilts already showed titres to A. suis , due either to previous vaccination and/or exposure, however; vaccination prior to farrowing doubled antibody titres. These high titres should improve the likelihood that passive immunity to A.suis is delivered to the piglets through the colostrum of these early parity females. 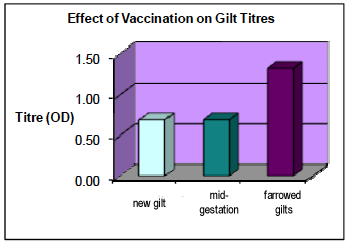 A. suis bacterins are also frequently used to vaccinate weaned pigs for protection through the grow/finisher stage.